Seljalandsfoss is one of the most breathtaking waterfalls in South Iceland with a whooping 196 ft (60 m) cascade. The waterfall is loved by travelers because you can actually walk behind it! Step behind the curtain of water and marvel at Iceland’s South Coast from a completely new perspective.

In popular culture, Seljalandsfoss Waterfall in Iceland has been featured in movies and music videos. Justin Bieber’s music video for the song “I’ll Show You” was filmed at many South Iceland attractions, including Seljalandsfoss. Parts of the TV series “The Amazing Race 6” and “CKY2K” were shot near the waterfall. 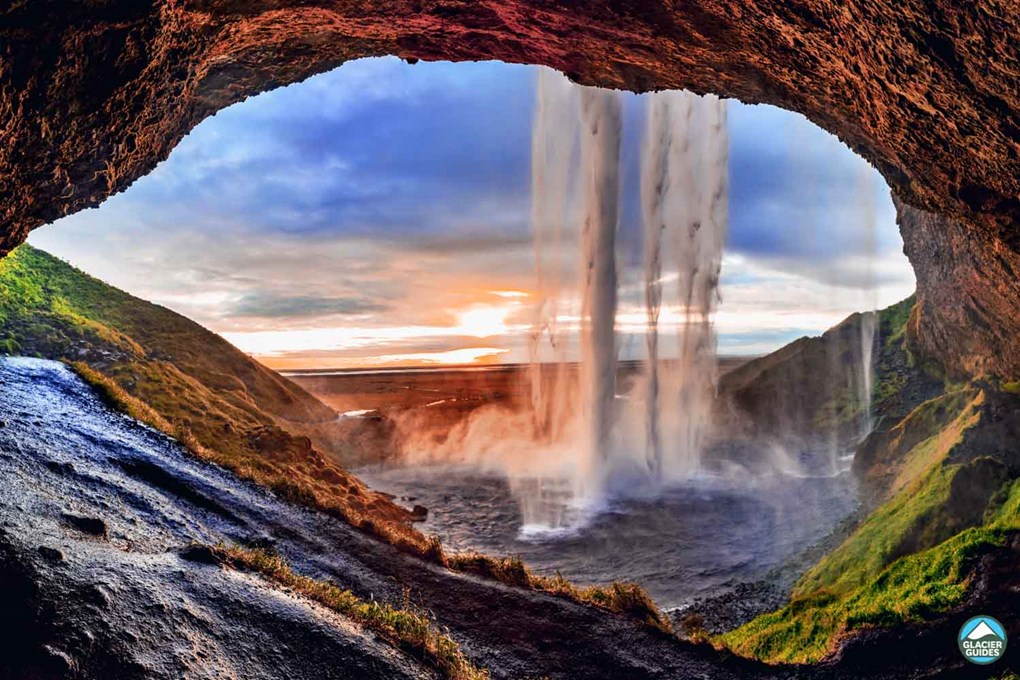 How Was Seljalandsfoss Formed?

The waterfall is formed by the Seljalands River, which originates in Eyjafjallajökull Glacier Volcano. Filled with glacier meltwater, the river rushes south and cascades down the high rugged wall of the cliff.

Seljalandsfoss once flowed all the way down to the Atlantic Ocean. Now, a patch of lowland lies between the ocean and the waterfall. You can see the ocean and breathtaking views of the South Coast from the top of the cascade. 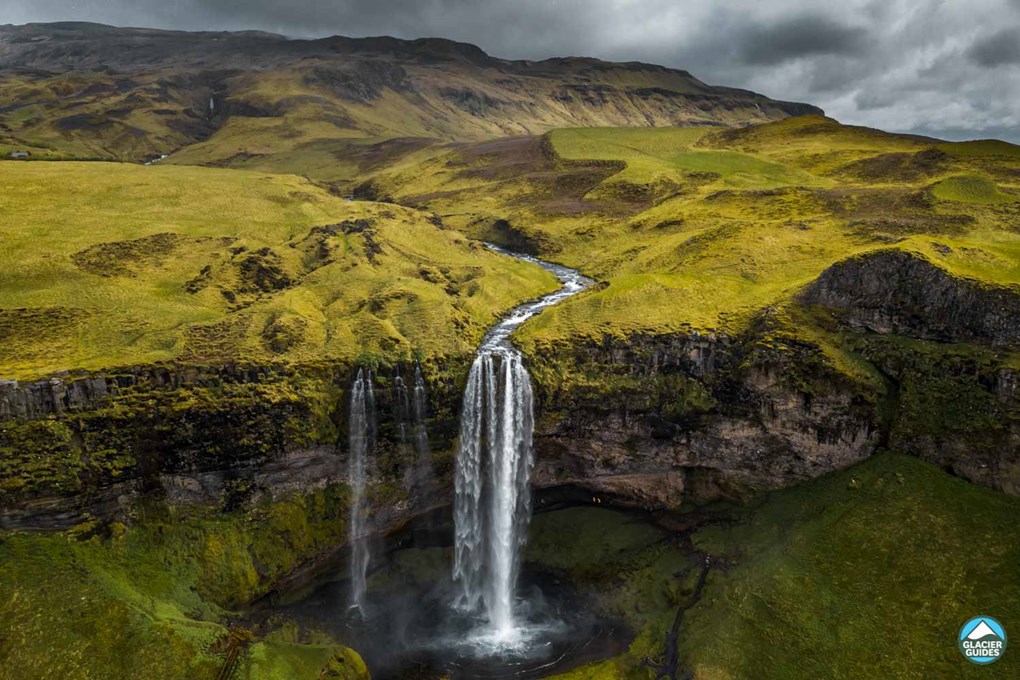 The waterfall is available to visitors in both summer and winter. There are no entrance fees to Seljalandsfoss or opening hours. Keep in mind that the path behind Seljalandsfoss might not be accessible in the winter due to icy conditions. If you decide to visit in winter, make sure to wear shoes with spiked soles so you can keep steady on your feet.

There is a designated Seljalandsfoss Waterfall parking lot so you don’t have to park your car on the side of Route 1. Please note that you’ll need to pay a Seljalandsfoss parking fee. It costs only 800 ISK and will last you the whole day. Make the most of your time by visiting other nearby natural wonders while you’re there! 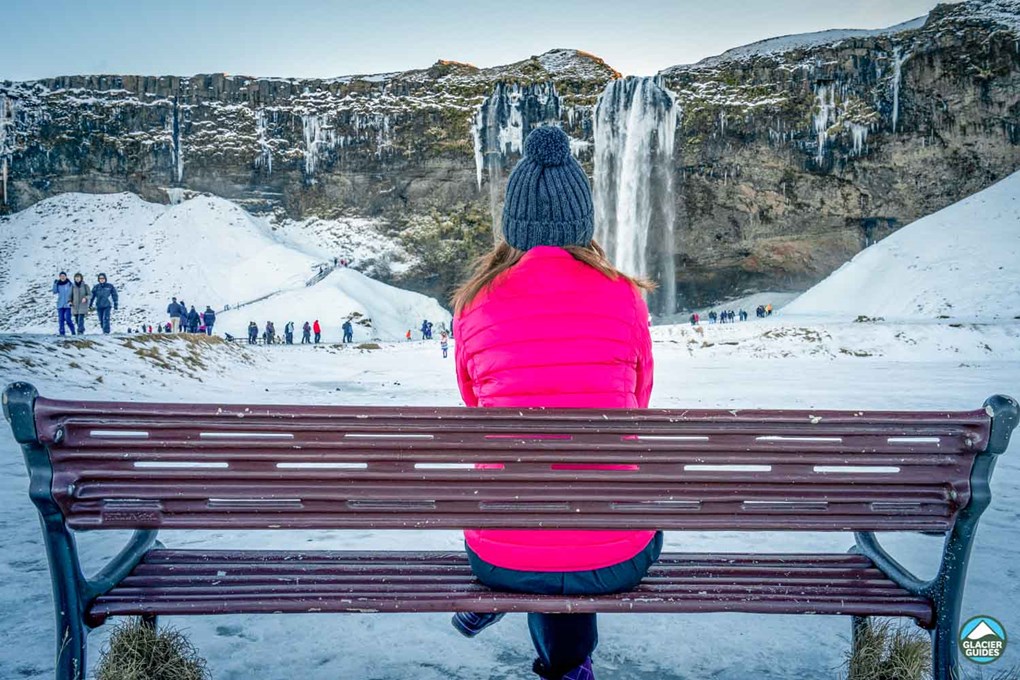 In the area, you’ll find a shop where you can buy souvenirs and a small food kiosk with coffee and sandwiches.

How to Get to Seljalandsfoss?

Seljalandsfoss Waterfall is around a 2-hour drive from Reykjavik and easy to get to whether you’re going by car or bus.

Driving from Reykjavik to Seljalandsfoss. Take Ring Road 1 and drive towards the South Coast. After around 78 mi (127 km), you’ll see a turn onto Road 249. Take the turn and drive further for 0.62 mi (1 km) until you reach a parking lot on your right.

The waterfall is visible from the Ring Road, so you won’t miss it. During the short winter days and dark nights, the waterfall is illuminated by massive light beams — a spectacle on its own. 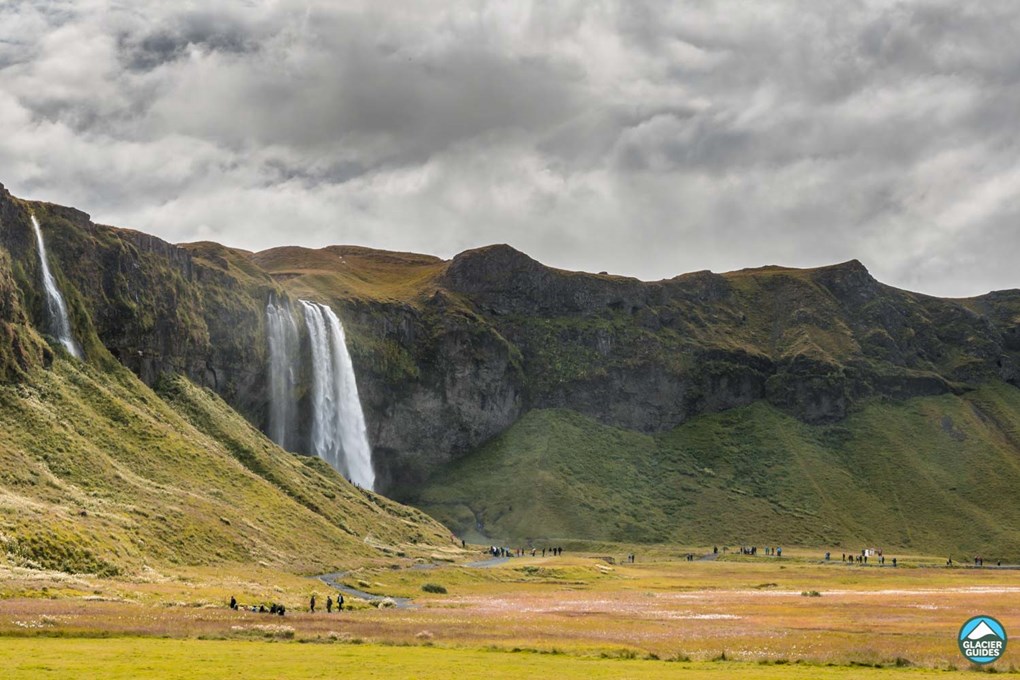 Weather in the Seljalandsfoss area is no different from the rest of Iceland. Summer is the warmest season and temperatures range between 46°F (8°C) and 57°F (14°C). The Midnight Sun from June to July allows you to explore as many landmarks as you want in the daylight. You’ll also have magical light that provides a great atmosphere for stunning photographs. 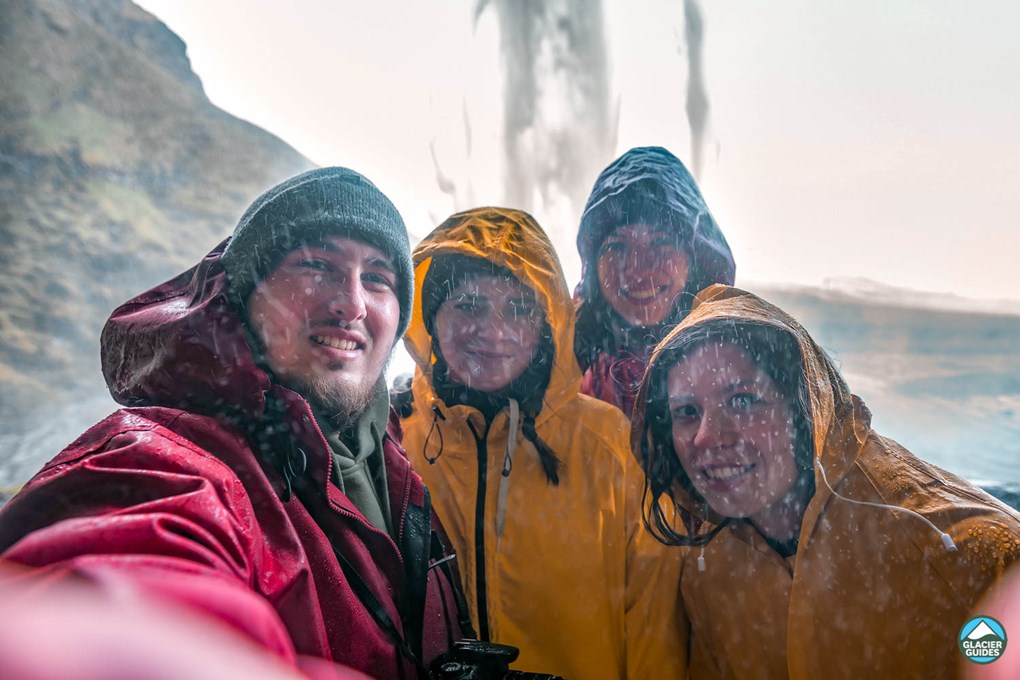 The weather in Iceland never gets hot, so packing for a trip is easy. You should always have warm layers (base and middle layers) as well as waterproof pants and a jacket. A good pair of sturdy hiking shoes will definitely come in handy no matter what activities you’ve planned.

Expect to get wet when standing by Seljalandsfoss Waterfall. The wind blows the mist from falling water quite far, producing perfect rainbows around the falls.

Attractions near Seljalandsfoss Falls in Iceland

There are a lot of other attractions to see in the area. From the falls, it’s easy to reach the South Coast, Golden Circle, and a few other waterfalls.

If you head further up Road 249, you’ll see a sign saying Paradisarhellir. The sign will lead you straight into the tiny canyon where you’ll see Gljufrabui Waterfall. The waterfall is yet to be discovered by many and as its name states, it’s hidden in a canyon.

A staircase by the towering canyon will lead you down to a narrow entry, where the breathtaking view of this 131-ft (40 m) tall hidden jewel opens up. 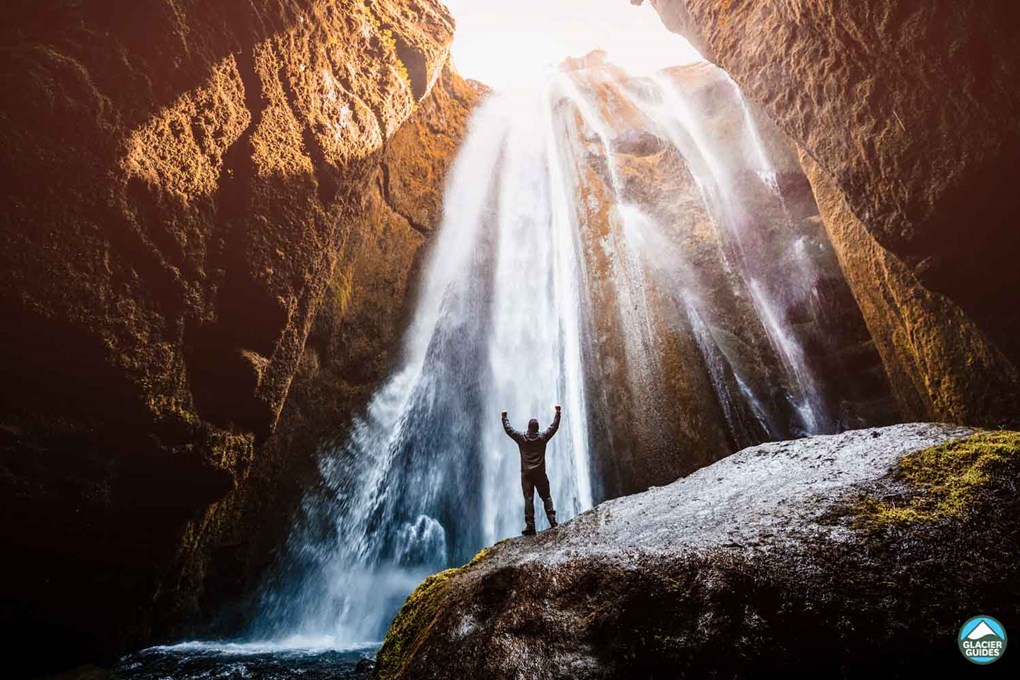 You can’t go to Seljalandsfoss without visiting Skogafoss too! Skogafoss is another stunning waterfall located just 18.64 mi (30 km) away. Slightly bigger than Seljalandsfoss, Skogafoss falls some 200 ft (62 m) down and is around 82 ft (25 m) wide.

Unlike Seljalandsfoss, you can’t walk behind Skogafoss, yet the waterfall is just as interesting. Legend has it that the first settler, Þrasi Þórólfsson, hid a treasure chest under the waterfall. But to this day, nobody has found it!

Skogafoss is located just outside of Skogar Town. There you can find restaurants, cafes, a guesthouse and a museum. There’s also a campground not too away. 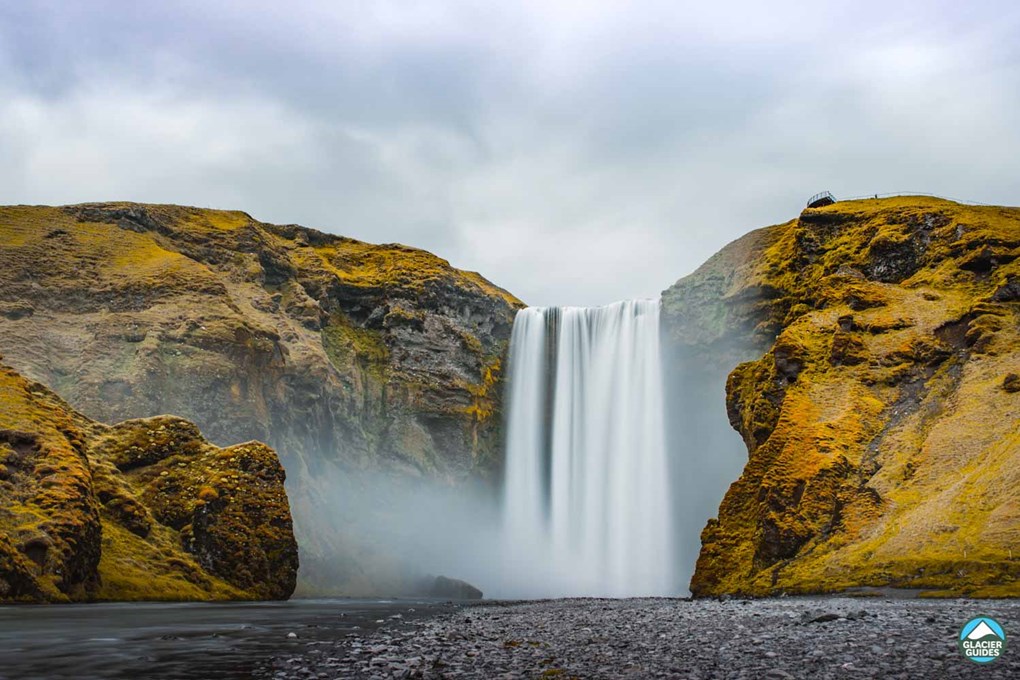 Exploring the waterfall from behind isn’t always possible during the colder season, but visiting in the winter is still a great choice! During the dark nights, the waterfall is illuminated by massive light beams. It makes a great focal point for your pictures with a breathtaking dancing aurora in the backdrop. 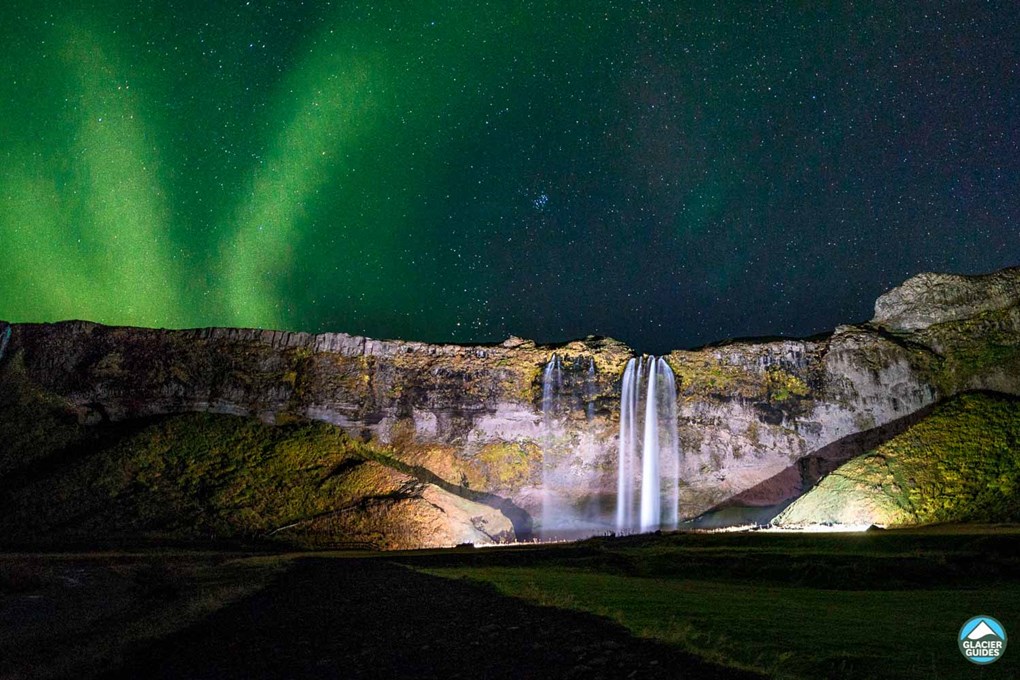 Perched between the towns of Hella and Vik, the waterfall is one of the first attractions along the Ring Road heading East. It’s often a stop on tours of Iceland’s South Coast. Join our South Coast, Jokulsarlon & Diamond Beach Day Tour and explore the waterfall together with a glistening glacier lagoon, stunning black sand beach, and neighboring Skogafoss Waterfall. 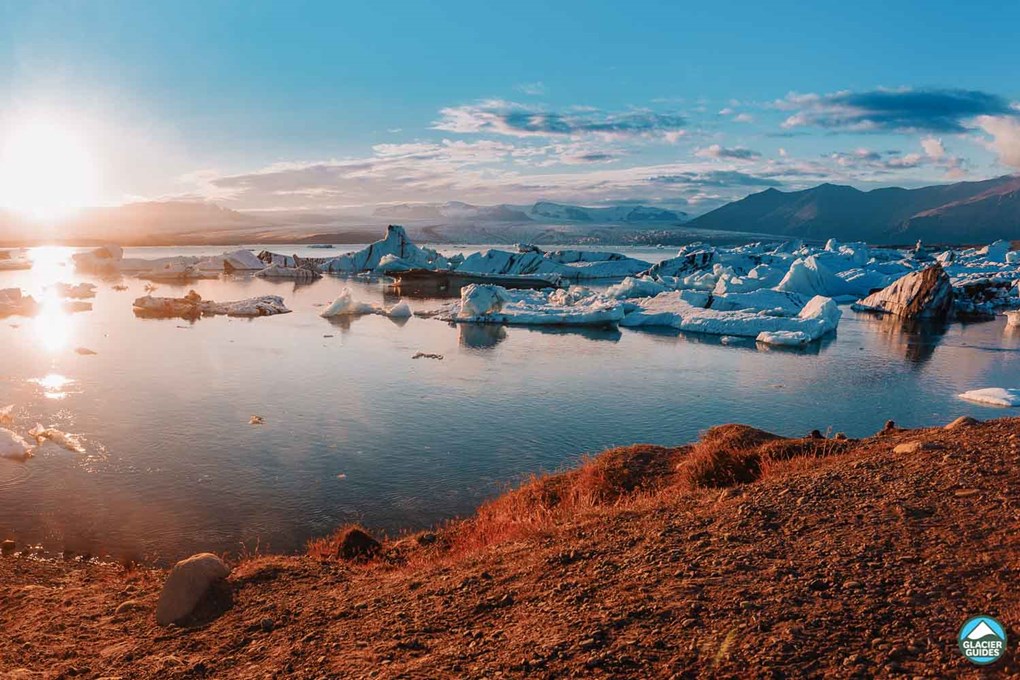 What to do around Seljalandsfoss Waterfall?

The falls are in a prime location for exploring fun activities in Iceland. 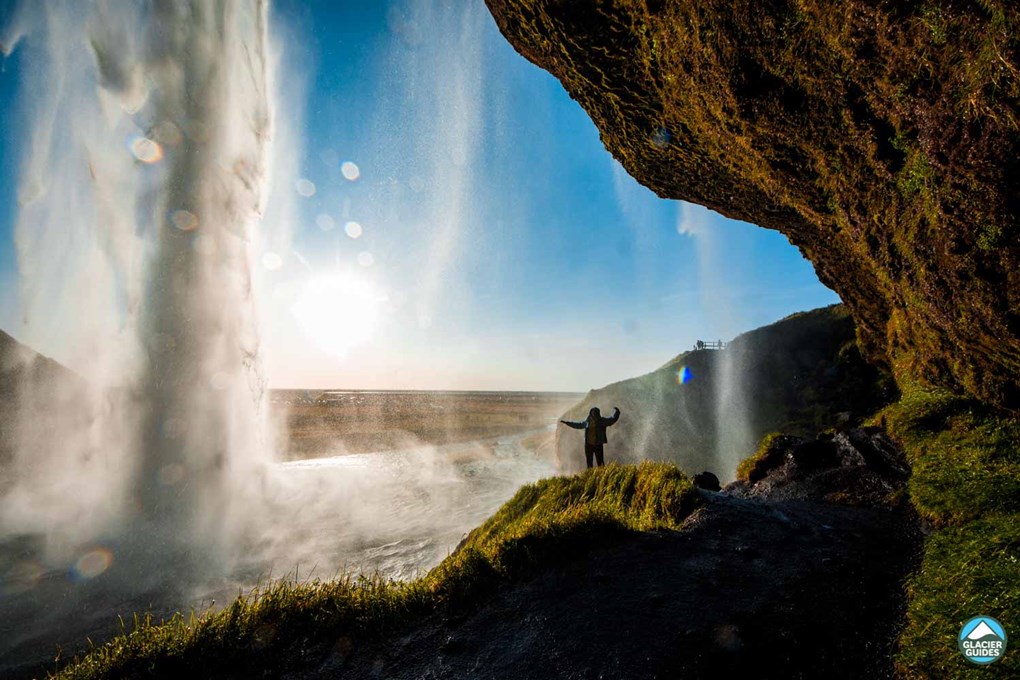 The must-do hike at Seljalandsfoss Waterfall is the hike that takes you behind it!. This is the only waterfall in Iceland and one of very few in the world that you can go behind. The view makes for breathtaking panorama photos of the South Coast.

Explore the area more with other fun hikes. You can hike out to Gljufrabui, a neighboring waterfall. Follow the clearly-marked path all the way to the falls. Once there, be careful when crossing the small stream, as it can be slippery.

Solheimajokull is an outlet glacier of Mýrdalsjökull Ice Cap, located only 98 mi (158 km) away from Reykjavik. The glacier’s close proximity to Reykjavik makes Seljalandsfoss and Solheimajokull a perfect combo!

Join us on an unforgettable tour to Seljalandsfoss and Solheimajokull. Explore the waterfall and go on a once-in-a-lifetime glacier hike with a certified glacier guide. 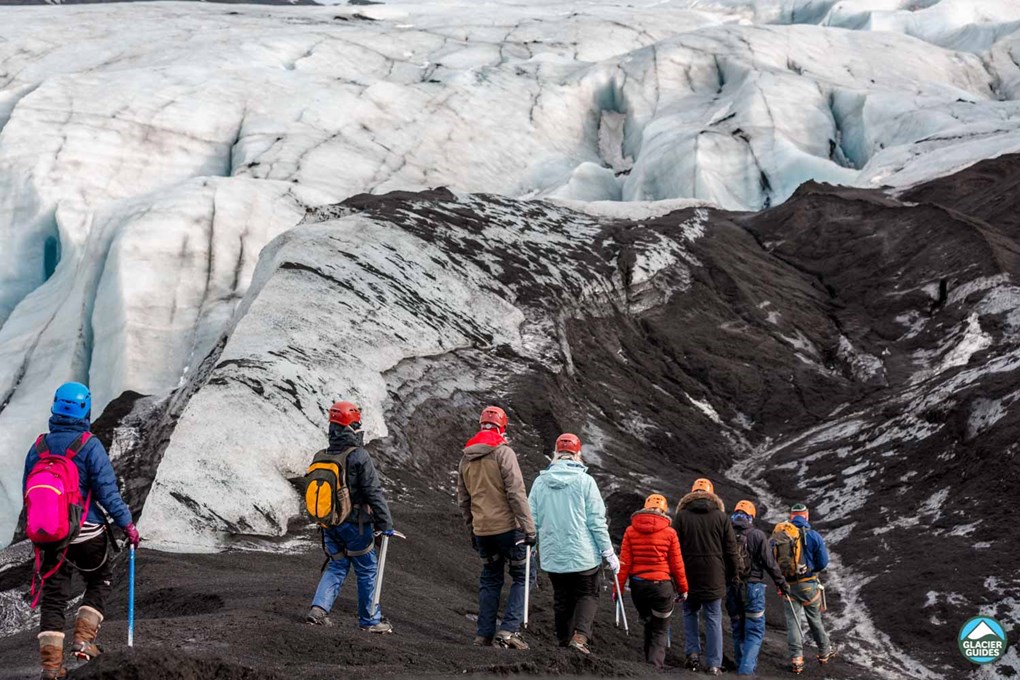 If you have a bit more time on your hands and feel like exploring Iceland’s South Coast more in depth, book our South Coast, Jokulsarlon & Diamond Beach tour from Reykjavik. On this full-day tour, visit Seljalandsfoss and Skógafoss Waterfalls, Jökulsárlón Glacier Lagoon, Diamond Beach, and many other popular attractions in Iceland.

Where to stay in Seljalandsfoss 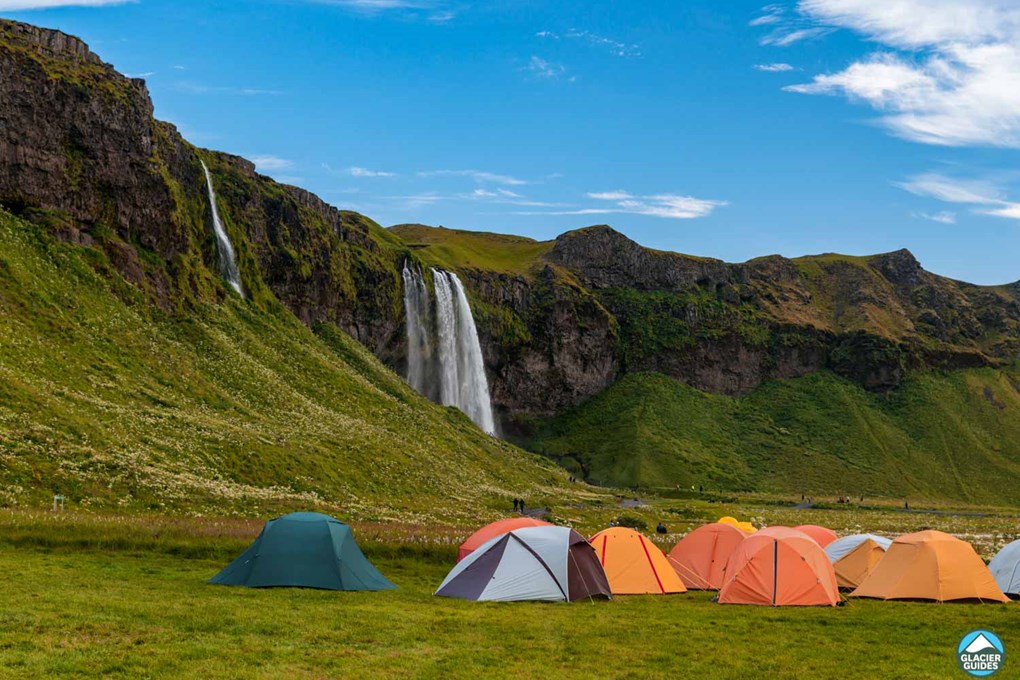 Wild camping is forbidden on Iceland’s South Coast. If you’re looking to stay in a tent, there is the Hamragarðar Campground around 2 minutes away from the Seljalandsfoss Waterfall, right in front of Gljufrabui Waterfall.

The campground is equipped with counters and tables, stoves, dishwashing stations, bathrooms, laundry rooms, and showers. There’s also an information center where you can buy snacks. 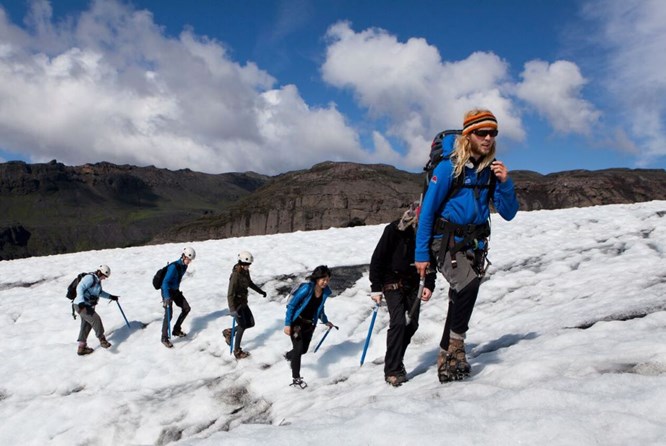 Ever wanted to step foot on a glacier? This tour is available all year round directly from Reykjavik and includes a short glacier hiking tour on the stunning, ever-changing glacier tongue of Myrdalsjokull glacier, Solheimajokull glacier. 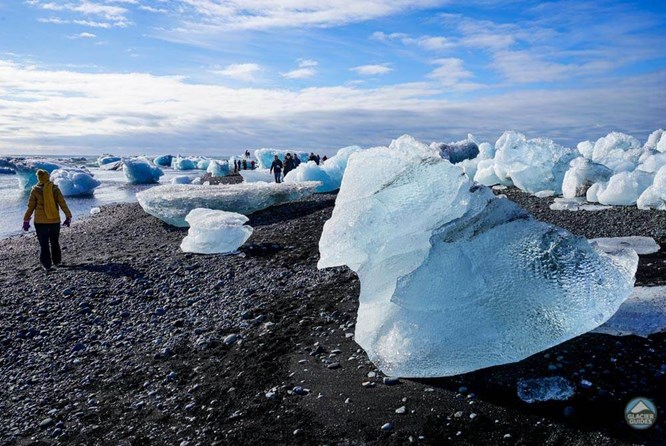 The perfect day trip from Reykjavik. Escape the hustle and bustle of the city for an adventure of the south coast and all the way to Vatnajokull National Park. Explore Jökulsárlón Glacier Lagoon and the sparkling Diamond Beach. This is a fast paced trip offers an opportunity to see highlights of the south coast in just one day!